The Negev desert is the place with the highest density of archeological sites on earth. It has been criss-crossed and inhabited by an uncountable number of people from different origins 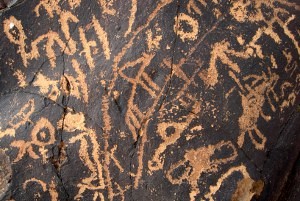 duringrockDrawings the past millenia. They have left their marks in the form ofrock-drawings, temples, churches, synagogues, mosques, caves, settlements and cities. White stones covered with desert-pavement
can be found in many places and where used by pilgrims for documenting their paths, beliefs and visual impressions during their spiritual journey through the Negev. Egyptians invented the art of copper-melting in the southern Arava by taking advantage of the unique wind system of the rift-valley. The Israelites left countless marks while wondering 40 years through the wilderness of the Negev on their way from Egypt to Canaan. They built small settlements and further developed the art of agricultural practice which was invented during the Neolithic era of the Middle East. Their remains are visual testimonals of the bible.

Many nomadic tribes inhabited the Negev, bred camels, horses, donkeys, shep and goats, carefully managed pastures, and wandered in a fashion that was well adapted to the constraints of this desert. One tribe, however, excelled all other tribes. It became very prosperous and developed the science caves and art of desert agriculture which is astonishing even by today’s standards. It left a large number of runoff terraces which are still intact today 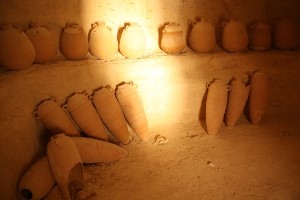 and were engineered based on carefully observed hydraulic principles. The Nabateans, as the tribe was called, assimiliated the Aramic script and language from remnants of the former Edomite kingdom. This is the reason why the only inscription found from the early Nabatean period was written in Arameic. They became rich traders, built cities which were connected by trade routes and used camel caravans for transporting spices, silk, ivory, and herbs priced as high as today’s perfumes, medicine, and cosmetics.

In consequence of the conquest of Gaza’s harbour by the hasmonean king Alexander Jannaeus, the Nabateans became allies of the Hasmoneans against the Seleucid monarchs. The Nabatean kingdom continued to florish during the 2nd century AD as part of the Roman Kingdom. Later, during 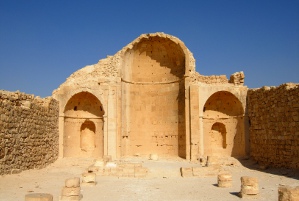 the 4th century AD, the Nabateans started to become Christians and began writing in Greek instead of Aramaic. They were forced into peasantry byzantineChurch1when their lands were invaded by Arabic tribes who partly served as vassals of the Byzantines. A large number of temples and churches were built during the shaken history of the Nabateans which are located in ancient cities of the Negev and adjacent Jordan.

Different tour options are available for exploring the rich history of the people which inhabited the Negev.